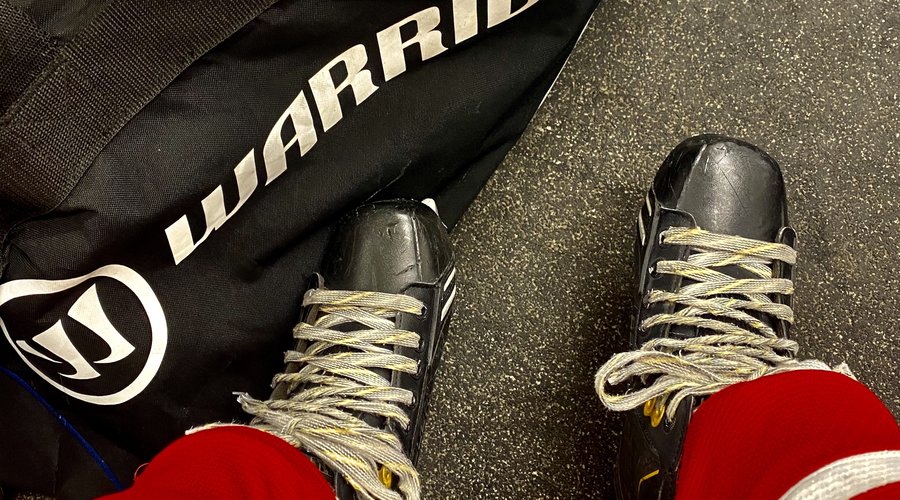 Bar down: when the puck goes in the net off the bottom of the crossbar

Bottle rocket: when a goal breaks the goalie's water bottle

Breakaway: when a player has the puck and an open skating lane to the net with no one in front of him

Celly: a celebration after a goal

Cheese: the top shelf of the net (see, top cookies)

Cherry picker: a player who stands behind the opposing team's defense in hopes for a breakaway

Chirp: when you trash talk to opposing players

Crossbar: the post that runs along the top of the net

Dirty: used to describe an incredible deke or pass

Five-hole: the area between a goalie’s legs

Garbage: referring to the puck when there is a rebound, picking up the garbage means putting the rebound in the net

Gongshow: when a game that is getting out of control, possibly from the score, a lot of fights or big hits

Hands: refers to a player who has good stickhandling and often dangles opposing players

Kronwalled: a big hit a defenseman lays on a player attempting to carry the puck out of his zone, derived from Detroit Red Wings defenseman Niklas Kronwall who is famous for this type of hit

Light the lamp: scoring a goal

Lumber: a hockey stick, derived from when sticks were made of wood

Open ice hit: a big hit on that happens away from the boards

Pinch: when a defenseman moves into the offensive zone in an attempt to keep the puck inside the zone

Playoff beard: when players stop shaving during the playoffs

Point: a defenseman in the offensive zone

Sauce: a pass that leaves the ice to make it more difficult for opposing players to intercept

Silky: used to describe a smooth occurrence such as a play or a player’s hands

Toe drag: when a player uses the end of his blade to dangle the opposition

Twig: a hockey stick, also derived from when they used to be made of wood

Wheel: refers to a player's strong skating, in addition to picking up girls

Wraparound: when a player takes the puck around the back of the net and tries to score in one full motion